This past summer, BEST began filming on our biggest training project of the year.
October 3, 2019 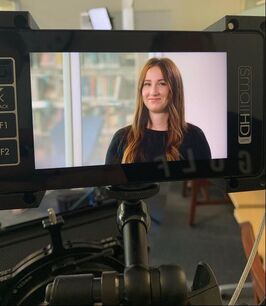 This past summer, BEST began filming on our biggest training project of the year. Our staff has been busy making customized human trafficking prevention training videos for employees and tenants of the Port of Seattle.

BEST has conducted smaller in-person trainings for the Port of Seattle in the past, but this new video-based training is a much larger project. The Port of Seattle is the first Port in the country to create online human trafficking prevention training for all of their employees, as well as their aviation and maritime partners.

To develop the training, BEST first met with the Port of Seattle to understand their training needs. We quickly determined that we would need to develop two separate training videos. One for people who work at the airport, and one for people who work at the maritime facilities along the Puget Sound waterfront, including the industries of commercial fishing, cargo shipping, cruise, recreational boating, and maritime industrial development.

In addition, BEST is also creating customized management trainings for the Port of Seattle. One for managers at the airport and one for managers at the maritime facilities to help them understand the importance of providing their employees with training, and how they can safely report suspected human trafficking incidents.

This training at the Port of Seattle will make a big difference in helping prevent human trafficking in Washington State because these are the employees who work on the frontlines, interacting with over 45 million people each year as they move through the region’s seaport and airport. The Port of Seattle is one of the Pacific Northwest’s largest economic engines and international travel hubs, and that can also make it a place where traffickers move and exploit their victims.

To develop the customized training, BEST set up several focus groups with human trafficking experts, survivor experts, and key leaders in law enforcement, so that we could collect feedback to make sure the new training was survivor-informed and contains the most current reporting protocol, should someone witness a potential human trafficking situation.

BEST also interviewed vendors who have businesses inside the Port. We wanted to make sure we understood their needs for training employees as well. We heard that one of the most important challenges for vendors is taking time away from daily work in order to complete the training. So, after talking with vendors, BEST learned it was essential our training is no longer than 30 minutes. This will help managers be able to give their employees the time they need to take the training.

The flight attendant BEST interviewed was April Johnson. She had an incident on one of her flights from Seattle to Minneapolis where a middle-aged man was traveling with two very young women. It was late at night when the man came to the back of the plane to talk with the flight attendants. He asked them questions about how they were trained to spot human trafficking and he said it was something people were looking out for in Seattle.

After the man returned to his seat, April had a gut instinct that something was not right. She took a garbage bag and did a sweep through the cabin so she could look at the young women sitting with the man. The women were not talking, not sleeping, not on phones, and not reading. They were looking straight ahead. When the plane landed, April said they did not stand up and collect belongings and did not act like other travelers. She decided to file an incident report with her supervisor, and later learned that the man had been arrested for sex trafficking as a direct result of her incident report. April volunteered to be a part of BEST’s Sea-Tac Airport training video to encourage airport employees to speak up if they see something that could be human trafficking.
​
As of the publishing date of this article, BEST is still in the final stages of editing the training videos for the Port of Seattle. Our goal is to finalize the trainings in October, so the Port of Seattle can begin training employees in early 2020.