Many employees in the hospitality industry speak Spanish as their primary language
February 6, 2018 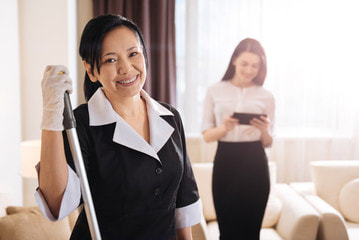 Many employees in the hospitality industry speak Spanish as their primary language, yet training materials are often administered in English. In order to better serve the needs of the hotel industry, BEST has just launched a Spanish version of its valuable Inhospitable to Trafficking Training (ITT). This new Spanish version of ITT will be valuable in reaching more hotel employees and training them to be aware of the warning signs of a human trafficking situation occurring at their hotel. ITT explains how hotel employees can identify, safely intervene, and report potential human trafficking activities. Often Spanish speaking employees are on the front lines of noticing a potential sex trafficking situation occurring at a hotel, so the new Spanish version of ITT is vital, and will greatly benefit the hospitality industry.

The Spanish version of ITT was developed when BEST recognized a need for it while working with the Snohomish County Lodging Association (SCLA) to implement ITT training throughout its member hotels. The SCLA explained there is a sizable Spanish speaking workforce inside their member hotels and having training available in Spanish would be valuable. BEST submitted a proposal request to the board of the SCLA, requesting they fund the work of translating ITT into Spanish.

The request was approved, and BEST was allocated $5,000 to fund the Spanish translation project. Shawn Walker, Vice President of Operations and Human Resources at 360 Hotel Group in Lynnwood, was a strong advocate for ITT being translated to Spanish. “On behalf of hoteliers across the County, I want to send a huge THANK YOU to the Snohomish County Lodging Association. I am proud that the Board of Directors and general membership passionately embraced stepping forward to be BEST’s first language translation sponsor. With their vision and support, BEST has been able to fully translate their training materials into Spanish. A project that will benefit all of Washington,” Walker said. “As hoteliers we are critically aware of the role each of us and our hotels must play in supporting awareness and training. We also understand that in order to make hotels truly ‘Inhospitable to Trafficking’ we will need 100 percent of our team members on board. This starts with communication and training for everyone. And when we can communicate in someone’s native language, especially on a deeply emotional subject like human trafficking, we create better understanding, connection, and trust. This gives all of us the greatest opportunity to have our teams recognize and report situations that could make a huge difference in someone’s life.”

Thanks to the SCLA’s keen foresight to tackle this need in the industry, Spanish ITT training is now available for all the hotel clients BEST serves. BEST would also like to thank the Snohomish County Tourism Bureau, and Executive Director, Amy Spain, for supporting the Spanish translation project, and for helping to implement ITT training across Snohomish County.