Sex Trafficking: Is it Affecting Your Company?

Very few people who are bought for commercial sex are voluntarily selling their bodies. Quite the opposite.
April 20, 2016 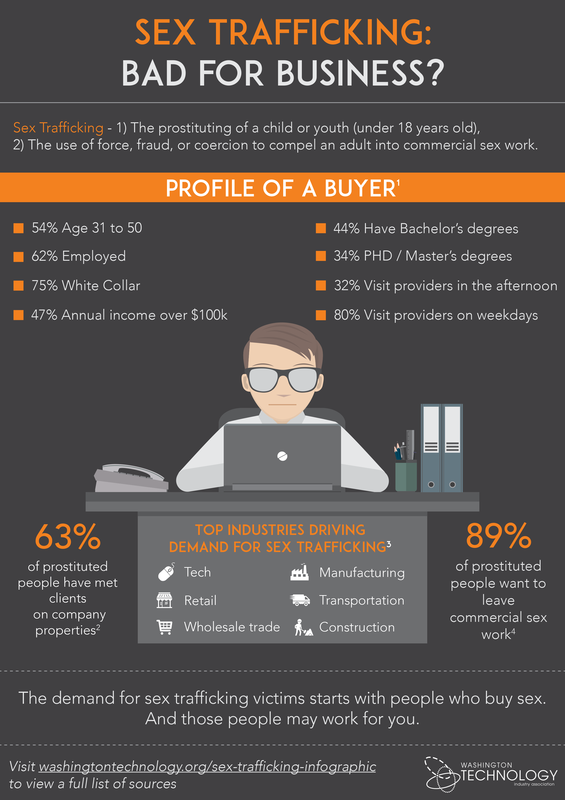 Very few people who are bought for commercial sex are voluntarily selling their bodies. Quite the opposite. The vast majority of prostituted women would leave commercial sex work if they had a viable alternative.
​
People who are compelled into commercial sex through force, fraud, or coercion, or who are under the age of 18 are legally defined as victims of sex trafficking. Sex trafficking isn’t only bringing girls across borders to work in commercial sex. It’s happening to young girls and women in our own communities. In our own city.
​

“When I was 14 there was a guy who lived by my school bus stop. He ended up trapping me, pimping me, and had me do things that I never would have wanted to do as a child.”
​

Why is this happening?

It’s simple high-school economics. There’s a vast demand due to extreme numbers of people, mostly men, who want to buy sex. In Seattle alone there are over 100 websites where you can buy sex. In just one 24-hour period in Seattle an estimated 6,847 people solicited sex on just one of these 100+ websites. There isn’t enough ‘supply’ of women who voluntarily want to sell their bodies for sex. As a result, women are forced, or trafficked, into meeting the demand.
​
Who are the people who want to pay to have sex?

​Clearly, this is a difficult question to answer. Not many buyers want to freely admit to their behavior. Law enforcement report that they arrest buyers from all walks of life, from military personnel to CEOs, from aviation engineers to software engineers.

Let’s consider just one of these 100+ websites. This particular site has over 1.3 million reviews, posted by buyers about their experiences with prostituted women. Users also participated in polls where they self-reported their demographics. The results paint a detailed picture of the buyers, describing them as highly educated, employed, white-collar workers, with a large disposable annual income. They access the website from work, and visit their ‘providers’ on weekday afternoons. Another initial study on buyer behavior showed that one of the peak times people are online trying to buy sex is 2:00 pm. These people may be working with your organization.

63% of prostituted people say they have met buyers on company properties.

​People charged with soliciting sex from children (victims of trafficking) in King County come from all industry sectors. The top industries of these buyers are Tech, Manufacturing, Retail, Wholesale, Transportation and Construction. 63% of prostituted people say they have met buyers on company properties. If your employees are engaged in commercial sex, they are not only fuelling sex trafficking, but they are also putting your organization at risk. Your business reputation may be damaged. Your work culture becomes increasingly hostile to women. Productivity decreases. And you face legal and financial risks.
​
Demand for commercial sex starts with the buyers. There aren’t enough women willing to sell their bodies for sex voluntarily to meet this exceedingly high demand. As a result, vulnerable women are being forced into commercial sex. This is sex trafficking. Buyers are putting your organization at risk. You have an opportunity to be part of the solution.

How Can You Help?

​Join WTIA & BEST for a half-day conference on sex trafficking and the tech sector.
Participate in discussions covering: